They’ll be heading to across the globe as Poor studies how fine-scale habitat use and landscape connectivity affect the endangered Sumatran tiger and Rich develops a long-term monitoring program for carnivores in Botswana.

Poor’s research will take place in Sumatra’s Riau province, where mixed-use corridors connect three protected areas of tiger habitat. A crucial aspect of Sumatran tiger conservation is to determine whether tigers are traveling between the protected zones and interbreeding with neighboring populations. “If populations become isolated it can lead to inbreeding depression, susceptibility to disease, low population numbers, and even extinction,” she explained.

Mixed-use corridors are made up of forests, settlements, and agricultural areas, including palm oil plantations. Interactions with tigers in the inhabited areas of the corridors are often negative, leaving an open door for Poor to include an educational aspect to her stay. “Many locals aren’t aware of the danger, and possibly not aware of the low population numbers of tigers,” remarked Poor. “They see them as a nuisance.”

Poor will be collecting samples of genetic material to study, employing a remote sensing component to study habitat connectivity, and potentially collaring tigers to observe their specific movements and activities.

“One of our goals is to figure out why and how tigers are using palm oil plantations and to use that information to influence plantation management, decrease conflicts between humans and tigers, and increase local awareness about the tigers,” Poor concluded. “Hopefully we can get the tigers to sustainable numbers so we don’t have to worry about extinction.”

Rich’s work in Botswana will be a continuation of the groundwork she laid in 2013 (as reported in the summer 2014 issue of CNRE News). “It will be more extensive,” Rich explained.

Her research utilizes track surveys and motion-sensitive camera traps to gather data concerning the population numbers, locations, and behaviors of Botswana’s native carnivores. Her research will help local agencies protect the animals, and by extension, ecosystem and economic stability, since wildlife tourism contributes a huge portion of the nation’s economy.

“The children see wildlife in their natural environment and learn natural history, animal behavior, and field research methods,” Rich said. “We hope to inspire the youth to be concerned with conservation, thus increasing the chances of wildlife persisting in and outside of protected areas.”

She hopes her research and methods will contribute to wildlife management and land-use planning in other regions of Africa as well. 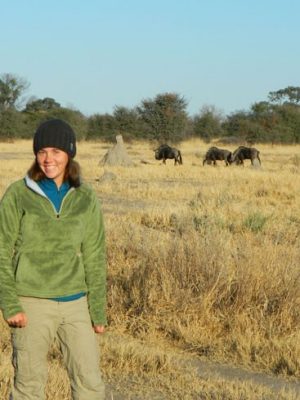